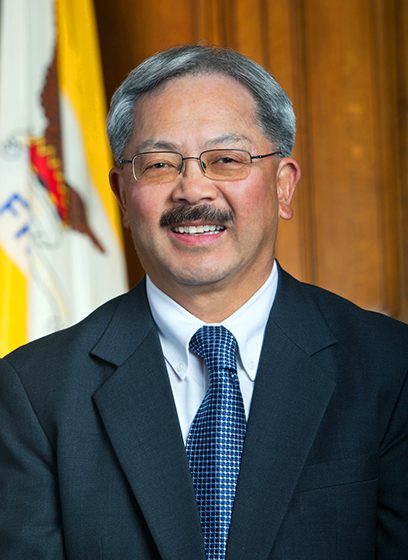 Mayor Edwin M. Lee, 61, was sworn in on January 8, 2012 as the 43rd Mayor of the City and County of San Francisco. Mayor Lee was the first Asian-American mayor in San Francisco history.

Mayor Lee was elected on November 8, 2011 by the people of San Francisco while he was serving as Interim Mayor. He had been unanimously appointed as successor mayor by the Board of Supervisors on January 11, 2011 to fill the remaining year of former Mayor Gavin Newsom’s term who was sworn in as California’s Lieutenant Governor.

Mayor Lee remained focused on economic development and job creation, taking responsibility for building San Francisco’s future, taking responsibility for helping each other and making City government more responsive, efficient and accountable through innovation and technology. This is what it will take to keep San Francisco a thriving, diverse, dynamic city of great neighborhoods, but also one that is a global hub for innovation and new economy industries.

Mayor Lee was Chair of the US Conference of Mayors Technology and Innovation Task Force.